As a species, humans are sure becoming attention-deficit. In fact, our attention span is shorter than ever, having dropped from…

Sorry, where was I? Right. You’ve likely heard the stat that the average human attention span has fallen from 12 seconds in 2000 to just 8 seconds today. As Time points out, goldfish are able to hold their focus longer than we are.

This is precisely why, despite our supposed annoyance with clickbait blog post titles, they’re crazy effective.

You know the type I mean:

Larry Saw a Squirrel Talking to a Highly Intellectual Goldfish… You Won’t Believe What Happens Next!

How — and why — do these headlines work?

The science behind effective headlines

Headlines like the one above work because they create a knowledge gap and tap into an incredibly powerful human trait: curiosity.

As George Loewenstein wrote in an American Psychological Association bulletin way back in 1994:

Curiosity has been consistently recognized as a critical motive that influences human behavior in both positive and negative ways at all stages of the life cycle… Advertisers have begun to harness the power of curiosity in “mystery” ads that reveal the identity of the product only at the end of the advertisement.

Decades later, media brands have tapped into the same strategy for headlines, using curiosity to create that knowledge gap. It leaves the reader feeling there’s a question they simply must have the answer to — and they get it by clicking through.

Sites like BuzzFeed and Upworthy capitalize on this with great success, generating millions of daily pageviews by bucking the journalistic tradition of stating the most important information in the headline. Instead, headlines have become an opportunity to generate an emotional reaction and compel the reader to click.

Why do we need to strategize around headlines?

Because the current internet landscape, rife with competition and jam-packed with consumers thirsty for evermore engaging content, demands it.

Small communities were using the internet to communicate with one another back in the 1980s, but it wasn’t until blogging came along in the late ’90s that the barriers to publishing and broadcasting really started coming down.

And once brands got on board… well. 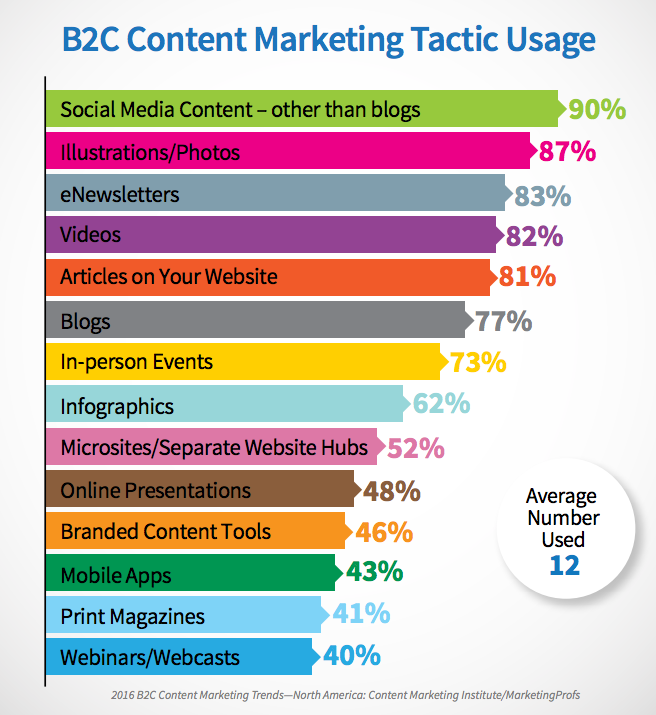 Eighty-one percent of B2B brands and 77 percent of B2C brands are now blogging, according to the most recent reports from Content Marketing Institute and MarketingProfs. Ninety percent of all brands are generating content for social media, including articles, images, infographics, slide decks, webinars, videos, newsletters and more.

Brands are practically tripping over each other in this race to generate the best content and get it front of the right people.

The average American now spends a whopping 490 minutes a day consuming media, according to a 2015 study by ZenithOptimedia. Every day of your life, you’re probably spending more than eight hours taking in TV shows, online content, radio shows and more.

But over the past five years, the amount of media we consume from online sources has doubled. We’re watching less TV and reading less print material in favor of consuming more web content. A lot more.

But if your headline sucks, readers aren’t going to spend a second of that time on your content.

And that’s the truth.

How to write a great headline: 5 data-backed tips

By now, you are hopefully 100 percent behind the fact that headlines are mission-critical. Now let’s see how to make yours EPIC.

A study of 150,000 article headlines by online advertising brand Outbrain found that when it comes to the optimal number of words in a great headline, eight is your magic number.

They reported, “…titles with eight words had the highest click-through rates with these headers performing 21 percent better than average.”

According to CopyBlogger, 8 out of 10 people will read a headline, but only 20 percent bother to click through and actually read the article.

Boring, sleepy headlines just won’t cut it. What makes yours different from the dozens of others on any given topic that they’ll see in search results? How do you stand out in social? Don’t be afraid to be different.

3. Use direct language and ask your reader a question.

Research shows that headlines that ask a question of readers perform better than those that don’t. Asking a question that speaks directly to the reader with the use of “you” or “your” is even more effective than just asking a rhetorical question.

4. Adapt proven headline formats for your use.

There’s no shame in taking a page from the book of a larger, more successful site. This infographic shows the top 30 listicle types by Facebook shares, from an analysis of BuzzFeed article titles: 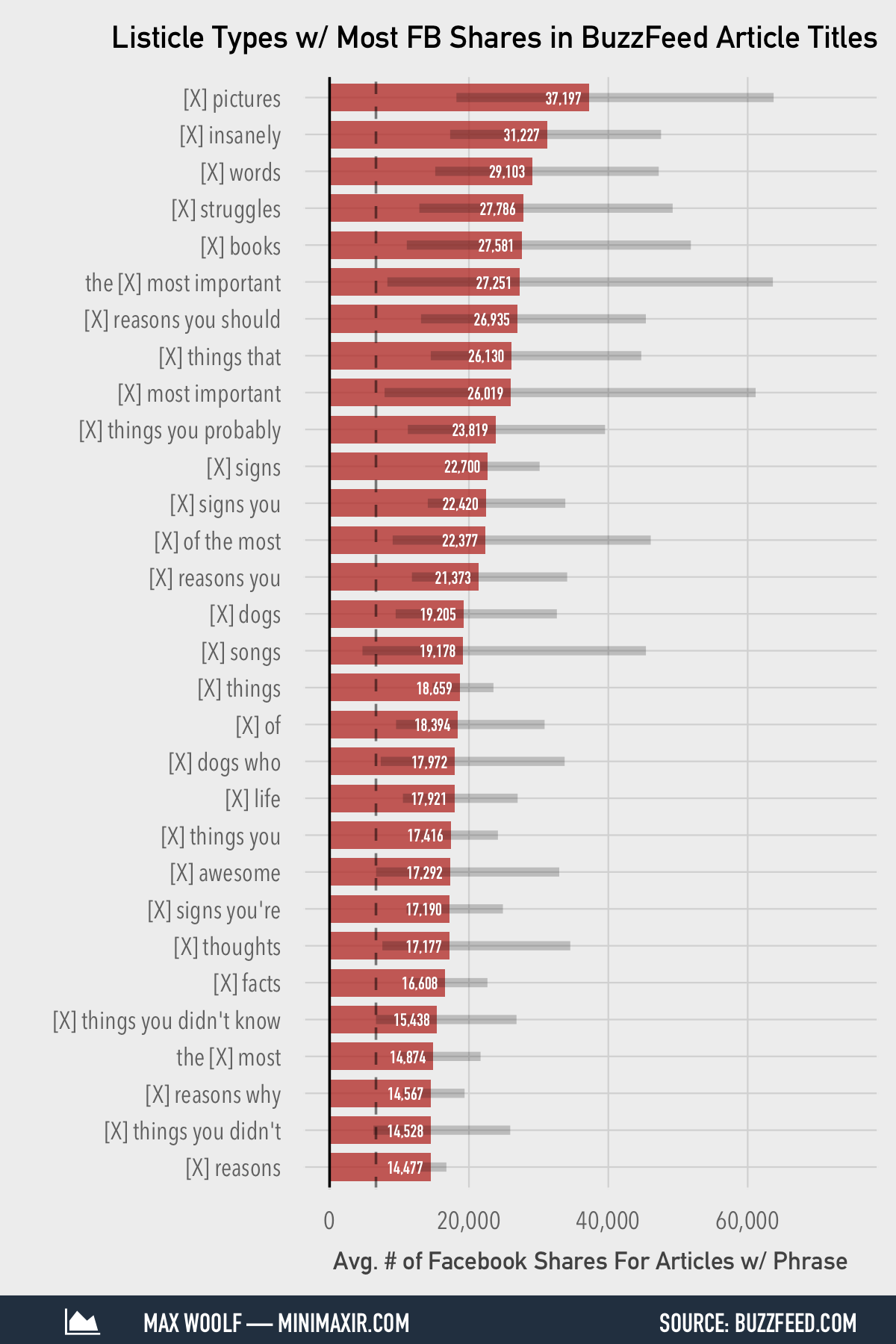 Obviously some (like “[X] dogs”) aren’t relevant for everyone, but you can adapt titles like “[X] Things You Didn’t Know About…” or “The [X] Most Important…” for your own topics.

In their analysis of 2,616 viral headlines, researchers at Ripenn found that titles on BuzzFeed, ViralNova, Upworthy and Wimp shared quite a few common elements. Namely, they tend to make bold statements, find common ground with readers and call people to action, among other things.

Now here’s something fascinating: Check out slide 23 in this Upworthy SlideShare. Writers at Upworthy create 25 versions of each headline before choosing two to A/B test! I’ve heard successful writers advocate that you should spend the majority of your writing time on your headlines, but this insight is a great way to quantify the effort going into the most successful titles.

And there you have it… I hope you can start using these tips to rethink your own headline strategy and improving your click-thru rates. Also check out Megan Krause’s phenomenal post on how to write a good lead for your articles.

Larry Kim is the founder of WordStream, Inc. and a contributor to Inc. Magazine, Search Engine Land, Social Media Examiner, HubSpot, MarketingProfs and ClearVoice. His key interests include AdWords/PPC/SEM, social media ads (Facebook/Twitter), entrepreneurship and startups. Follow him on Twitter.